The gap between computer vision and computer graphics is the main cause of perceptual problem in existing virtual/augmented/mixed reality techniques. Computer vision is fundamental in order to implement effective systems that allow a natural interaction of the users in virtual reality environments. Allowing people to act without experiencing the misperception issues such as the wrong perception of objects’ shape, distances, depth, or visual stress and fatigue.
The aim of this meeting is to bring together researchers and practitioners, from both industry and academia, in all aspects of vision, that can be effectively used in virtual/augmented/mixed reality.
We are seeking papers that address the challenges of vision in virtual/augmented/mixed reality systems for human-computer interfaces including, but not limited to:

All those interested in presenting material at this meeting are invited to submit a summary of their talk by email to Manuela Chessa (manuela.chessa@unige.it) by 13th March 2015.

Book online at www.bmva.org/meetings
£10 for BMVA Members, £30 for Non Members, including lunch 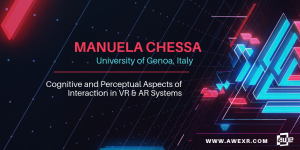