During the Milestones of yacht design: Renato “Sonny” Levi exhibition, which will take place in conjunction with “Salone Nautico 2016” in Genova 2016, from 20th to 25th September 2016 we will present our mobile application based on Augmented Reality: AR ‘Sonny’ Levi 3D viewer. 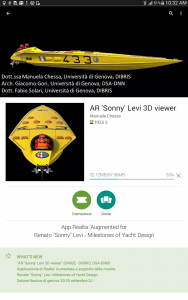 The app will allow the visitors to see in 3D Sonny Levi’s work. 10 different ships will be available on the app, and you will see them by looking at the pages of the catalogue with your phone/tablet camera.

The 3D models have been created in collaboration with the Master Degree “Corso di Laurea Magistrale di Design Nautico e Navale” in La Spezia, Italy. The Augmented Reality App has been developed at the Department of Informatics, Bioengineering, Robotics, and Systems Engineering of  the University of Genova.

The app is  available for both Android and Apple tablets and smartphones.

The app is base on Augmented Reality Technologies. It has been developed by using Unity framework and Vuforia platform.

The software analyzes the images captured by the phone/tablet and when a particular target is recognized, it is able to estimate the distance from the point of observation, the inclination of the camera, thus it correctly overlays the 3D content.

WHAT DO YOU HAVE TO DO?

Just download the app, by following the QRcode in each page of the catalogue, install it, look at the catalogue through the app…and enjoy it!

The app has be released on the App Store and on the Play Store!